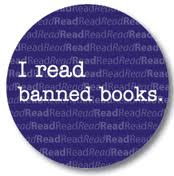 I'm going to give you all an assignment. Go to your local library. Get a library card if you don't already have one (and shame on you if you don't). Check out a book that some person or group has tried, at one time or another, to ban from school or public libraries. This is, after all, where most challenges to books come from.

It doesn't have to be a work of great literature, although people have tried to ban many of those. It can be a children's novel or series of novels...In some years in the recent past, the Harry Potter series, by J. K. Rowling, was one of the most challenged books, collectively in the year. It can be a fantasy book or series...J. R. R. Tolkien's Lord of the Rings series has not only been banned, according to information on the American Library Association's website, but was actually burned here in the United States in the not-so-distant past.

Speaking of burning books, Ray Bradbury's Fahrenheit 451, about a future culture where firemen don't put out fires, they go into people's homes and collect all the books they find and burn them. Good book, and one well worth reading or re-reading.

Anyway, go read a book. Go read a banned or challenged book. And talk about it. Let people know that you will not stand for disappearing a book from library or bookstore shelves just because someone else doesn't like what that books says. It's a First Amendment issue.
Posted by littlemissattitude at 9:55 PM

On that note, I read about a prisoner who had a book confiscated because the administration thought it would be inflammatory and incite a riot. It was something about the New Slavery.

I can't remember the exact numbers, but when I was looking at statistics over on the American Library Association website yesterday, I saw that there have been enough challenges to books in prison libraries to register in the statistics.

I had been hoping to write more about the statistics from the past two decades about where most books are challenged (in schools and school libraries) and who makes the most challenges to books (parents make the most challenges, by far), and why (the most challenges, predictably, revolve around issues regarding sexuality and language viewed as obscene) but I've got whatever cold is going around and I just posted this and went to bed instead. It depends on whether my sore throat and headache from yesterday stay away. So far, so good, but we'll see.

That should have read that whether or not I post a follow-up discussing the statistics today depends on how I feel as the day progresses. I really am feeling better, but it's still early and apparently not all my neurons are awake yet. :D