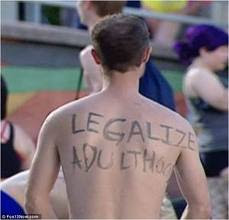 I see on Yahoo! News that about 3,000 people in Salt Lake City stripped down to their underwear on Saturday and ran from downtown to the state Capitol, where they circled the Capitol building, protesting what they characterized as the "uptight" laws of Utah.

Apparently, the organizers of the run said people couldn't run in the nude, but panties and bras, nightgowns, and boxer shorts were perfectly acceptable garb for the protest as the runners showed their frustration over and disapproval of conservative policies in the state. 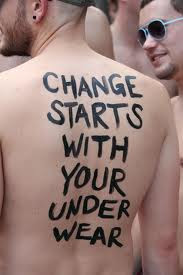 I like this as a form of protest. It's non-violent. It grabs attention. And, maybe best of all, it was a creative way of making the protesters' point. And, yes, it was underwear, and some people might have been offended, but from the photos I saw no one was wearing anything more revealing that might be worn at a public swimming pool. In other words, nothing any more revealing than might be seen on a typical broadcast of "Dancing With the Stars"

The only thing that would have made it better, as far as I'm concerned, would have been if they'd also run a circuit around Temple Square. Oh, I know. Church security would have had a fit and started detaining people. Still, considering the influence that the Mormons have on Utah politics, it would have been relevant. And with the numbers the protesters had, some might have gotten away with it.
Posted by littlemissattitude at 12:18 PM